In 2018, one of the leading OEMs of critical communication equipment in North America changed its specification for the Tower Top Amplifiers (TTAs) installed in critical communications network base stations. This has now become their only specification of TTA available for new or replacement installations throughout the land mobile radio (LMR) network in North America. The rationale for the switch to this new specification was not widely publicised, and there remains limited understanding in the market about the benefits of the change.

Filtronic was instrumental in developing a TTA product to meet the new specification. Working closely with the OEM gave us a clear understanding of the thinking behind the new specification, the advantages it offers to radio system installers, and the improvements in LMR communications it brings to first responders.

In this paper, we outline the background to the specification change, the problems associated with the old system, the changes brought about by the new specification, and its benefits for public-safety communications in North America.

The current public-safety communications network in North America was established in the 1980s and early 1990s. The network of base stations aims to give 100% area coverage across North America, providing guaranteed communications connections for police and other emergency responders using land mobile radios in any location.

When the network was initially designed and implemented, it was based predominantly on analogue radio technologies, which were state-of-the-art at the time. This system proved invaluable, however, it was insecure, enabling new, easily obtainable radio scanners to pick up signals and listen in to police radio and other first-responder communications. Over the next decade or so, the radios were gradually updated to use digital modulation schemes and eventually the data was encrypted, making them secure and preventing casual eavesdropping. At the same time, channel bandwidths were reduced to enable more channels to be accommodated. More recently, the individual communication channel bandwidth is being halved again in order to double the number of channels – so the evolution continues.

However, while the radios themselves have been constantly upgraded, the radio frequency (RF) components and base stations that support the communications network have not really altered since the 1990s. This means that some components installed in base stations, such as power amplifiers, power combiners, filters, antennas and other RF conditioning products, have remained unchanged since their installation almost 30 years ago.

One crucial component used in the majority of network base stations is the Tower Top Amplifier, which is used to improve receiver performance. TTAs incorporate a low noise amplifier installed at the top of the mast and a control/distribution unit installed at the base. The tower-top element incorporates a low-loss, bandpass filter to protect the receiver from out-of-band interference and a low noise amplifier to boost the received signal. The control/distribution unit at the base amplifies and splits the output signal to feed multiple different radio receivers. The tower top and base units are connected by a coaxial feeder cable running down the mast.

Over the years, many different companies have made the components for tower-top and base units, and there was some level of interoperability between them. But, over time, manufacturers opted to produce both the tower top and base elements together, meaning they had to be purchased as a pair which helped improve reliability and system performance.

An important feature of the original TTA specification was that the gain of the receive signal could be set to achieve the desired performance. That meant using attenuators to adjust the level of amplification and prevent the receiver from being overloaded. So, for example, in a dense urban environment where there is a lot of signal traffic, the gain can be reduced to prevent the receiver from picking up too many signals. This higher level of attenuation can also reduce system performance as well as restrict the range of the receiver. Conversely, for base stations in sparsely populated areas, the receiver needs to be far more sensitive so it can pick up signals from far away – so the attenuation would be reduced to achieve higher gain. At each base station, the gain would be set at the point of installation, according to the location of the site and its application.

The problem with the original specification for TTAs was that they featured two separate attenuators, providing two locations at which gain could be set. Both were housed in the control/distribution unit. The first ‘Reserve Gain Attenuator’ was located before the amplifier, and the second ‘Distribution Attenuator’ was located after the amplifier. As there are two locations for setting the gain, there are almost infinite possibilities for altering the ratio between them to achieve the same required level of overall gain. So, while the overall gain achieved might be the same, you would get different system performance depending on the balance between the settings of the two attenuators.

The Reserve Gain Attenuator influences the sensitivity and noise figure of the system and its performance in the presence of high-power interfering signals. The Distribution Attenuator effects the system linearity. So, setting the first attenuator high and the second attenuator low, produces poor noise figure, poor range, but high immunity to interference. The other extreme is to have little or no attenuation at the input and all the attenuation after the distribution amplifier. In this case, you would achieve the same overall gain as the above scenario, but with very good noise figure and increased range, but greater susceptibility to interference.

Because there were multiple ways to set the two attenuators to achieve the same level of gain, different installers could set up sites differently. Each manufacturer provided guidance on how to set attenuation levels for different locations, with little constancy from one product to another, meaning it was up to individual installers to achieve the required gain levels for each site by setting the attenuators in whatever way they chose. This meant that once the base stations were operational, it was sometimes difficult to diagnose the cause of any underperformance, since the attenuators could have been set in many different ways. Any problems, such as audio drop-outs or poor call quality, were difficult to rectify without knowing how the two attenuators at each base station had been configured.

The potential problems caused by this uncertainty were one of the reasons why the leading OEM requested changes to the TTA specifications in 2018. The two significant changes made to the specification were:

1. To remove the second attenuator completely, and instead have a single adjustable attenuator located before the amplifier in the control/distribution unit. That gave installers a single way to adjust gain for the whole system.

2. To improve the low noise amplifier in the tower top by making it more linear, with better noise figure than previously required.

The new specification for Tower Top Amplifiers proved particularly challenging to achieve, and several RF suppliers attempted the task before a successful product was developed. Previously, TTAs had incorporated stand-alone filters, amplifiers and other connectorized components, which were cabled together in a waterproof housing. In the new product, all components are fully integrated into a single cast housing. As well as meeting all the performance standards stipulated by the OEM, this new product provides a lighter-weight solution in a smaller footprint, enabling better utilisation of space at the communication tower.

There are significant benefits of the new TTA specification for installers, end users and – ultimately – the general public. Fundamentally, each base station can now be set up very simply via a single control to optimise gain levels for the site, according to its location and the density of base stations in the region.

Having a single attenuator means there is only one point of adjustment to set the overall gain for the site. That immediately removes any ambiguity about how gain levels should be achieved. It makes setting gain levels far simpler and more consistent across the entire network. It means that if you’re in a remote rural area, you can simply set the attenuator to achieve a high system gain of 15dB, while in an urban area you set a low gain of 5dB. That eliminates idiosyncrasies in the way different installers set up gain levels at different base stations.

To compensate for the loss of an attenuator, the specification for the amplifier at the tower top has been significantly improved. This means there is no loss of performance, despite only having a single attenuator in the base unit. It gives you the best of both worlds, having the benefit of a tower-mounted amplifier with the gain effectively set to maximum, while providing the control simplicity of having a single attenuator to set the overall gain level for the site.

The new TTA specification supports better LMR performance for all emergency service providers. It gives radio system operators the confidence that their mission-critical networks will operate reliably with resilient connections and higher quality audio, especially in congested urban environments. Ultimately, that means greater peace of mind and security for the citizens who rely on these vital rapid-response services. 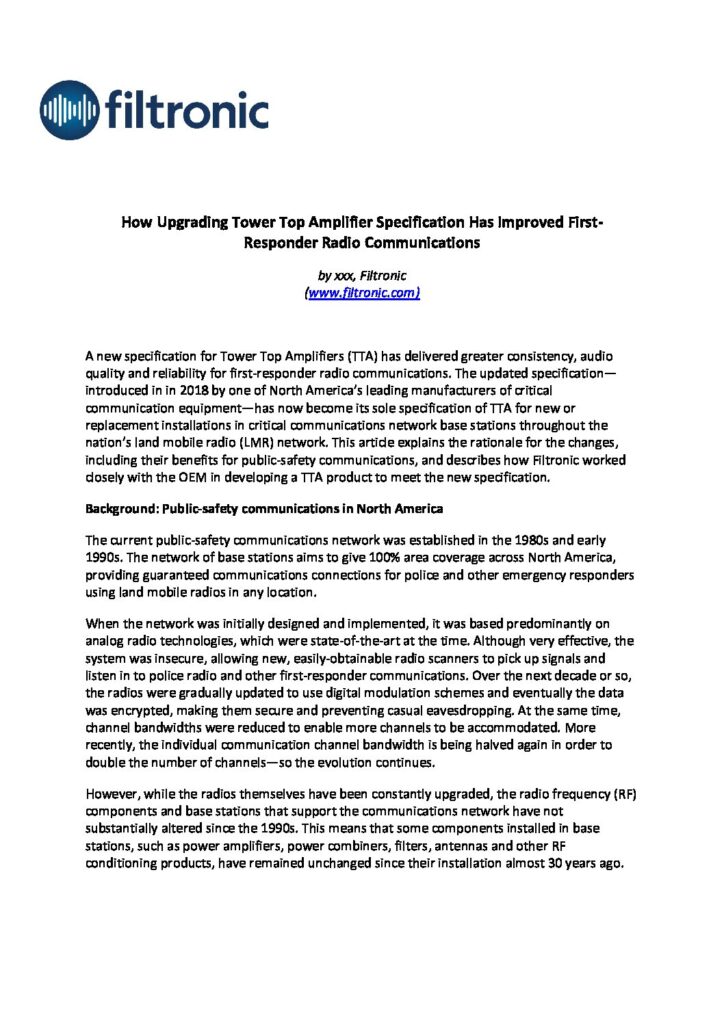