Increasing numbers of low earth orbit (LEO) satellites are being developed and deployed to address the challenge of providing ubiquitous broadband data coverage around the globe. These ‘mega constellations’ of new satellites will help to deliver the full potential of 5G and provide high-speed connectivity to remote parts of the world, including moving platforms such as aircraft and ships, as well as providing low latency connectivity for business users.

Conventional geostationary satellites remain in their fixed orbits for 25 years or more. To achieve such lengthy operational lifetimes in space, all components must meet stringent requirements for reliability and radiation tolerance. The testing procedures are arduous and, where component reliability is in doubt, redundancy is achieved at the component level, by installing two or more identical sub-systems as a back-up.

Using the stringent standards set for GEO and MEO satellite components would result in costly over-engineering for LEO satellite applications. So, to achieve the high quality and reliability levels required, LEO operators have tended to look to other demanding, high-performance applications – such as automotive – to set the standard for their satellite sub-systems. However, these general standards are not always fit for purpose, and there is a lack of suppliers with the necessary expertise at higher frequencies. These factors, combined with a lack of space heritage among suppliers, mean the LEO market requires a fresh approach if it is to meet growing demand for space-qualified RF components.

The volume of data being consumed worldwide is increasing apace, so there is an urgent need to increase satellite capabilities and network capacity. One example is through phased array antennas that make it possible to steer beams and target areas where extra capacity is needed, creating multiple beams at the same frequency. Care is required to avoid congestion and interference caused by overlapping beams, but in general it is possible to increase the capacity of satellites by reusing frequencies for different geographical areas.

Deploying digital processing capabilities within the satellite payload is another way to expand capacity. This enables data being brought to the satellite from users to be repackaged and consolidated on the satellite, creating extra capacity and allowing more efficient use of the frequency spectrum.

However, as demand for data increases worldwide, the ultimate constraint on expansion will be RF capacity. Delivering the extra bandwidth needed will require expansion into higher frequencies, not currently widely used for earth-to-satellite communications. Ku and Ka bands offer around 2GHz of available bandwidth each, although there is some protected bandwidth within these bands. This creates additional obstacles when it comes to developing frequency plans and implementing hardware. What’s more, communications channels are becoming very congested at Ka and Ku bands, which are also shared with geostationary satellites. The orbits of any new LEO constellations therefore must be very carefully plotted to avoid interference with existing geostationary satellite transmissions.

Future satellite systems will move to Q and V bands, and indeed the International Telecommunication Union (ITU) has already approved these bands for use in forthcoming constellations. These higher frequency mmWave bands are currently little used for satellite communications and provide an important way to increase the capacity of the feeder links between satellites and the terrestrial network. Q and V bands each provide up to 5GHz of additional bandwidth, with a few excluded sub-bands. Looking further into the future, even higher frequencies will offer greater scope for expansion, with E band providing two wide-open 5GHz segments of contiguous bandwidth.

As frequency increases, so does atmospheric absorption, which, along with the difficulties in generating power in these bands, makes the links more sensitive to environmental conditions. However, the wider bandwidth available means that modulation levels can be reduced and output power increased to maintain the link, retaining data rates comparable with lower frequencies. The capacity gains thus make it an attractive option that’s worth investing in to secure long-term broadband connectivity via LEO satellites.

Currently, there are very few RF mmWave payload systems available with space heritage. That’s a limiting factor in the market, but also a huge opportunity for RF component manufacturers with the necessary expertise and track record in critical terrestrial applications. With new and well-resourced satellite operators joining the burgeoning market for LEO satellites, the demand for high-quality, space-compliant mmWave components is set to grow significantly.

High-reliability mmWave transceivers and SSPAs for communications and defence applications are already being designed and volume manufactured in the UK – and these are precisely the components needed for next-generation satellite products. Proven UK expertise in producing high reliability u-wave and mmWave modules for defence and communications systems can be applied directly to satellite applications. And because these devices have been rigorously tested and successfully deployed in terrestrial networks, satellite operators can be confident in their capabilities for non-terrestrial applications. The semiconductor processes already used in mmWave devices for terrestrial applications are inherently tolerant to radiation, so do not need further testing for space compatibility. The microprocessors and transistors used to provide power and control can be sensitive to radiation, but cost- effective radiation-tolerant alternatives are readily available.

Recently, Filtronic has designed high-capacity transceiver modules for use in high altitude pseudo-satellite (HAPS) systems, providing communications links of up to 40Gbps at E-Band. HAPS stations are unmanned aerial vehicles that provide moving 5G base stations, operating in the stratosphere at an altitude of around 20km to provide a ‘base station in the sky’. They play an important role in expanding connectivity around the globe and directly to LEO satellites at much higher altitudes where atmospheric absorption is very low. Filtronic RF technology provides solutions for both HAPS and LEO satellites, and the functionality of its terrestrial communication systems has been expanded to provide the environmental suitability for satellite applications. Filtronic is actively involved in supplying LEO demonstration hardware for both ground and payload applications.

The solution to meeting the rapidly increasing demand for global broadband via LEO satellite constellations lies both in developing and manufacturing more commercially viable, high-performance RF components that can withstand the rigours of space, and in transitioning the bandwidths used for satellite communications into higher frequencies.

Since the u-Wave spectrum is limited and subject to many conflicting and overlapping demands, the development of feeder links operating in mmWave will be an important factor in the success of new satellite constellations.

While exploiting the possibilities of mmWave bands presents technological challenges, the experience we have in the UK of developing long-range terrestrial mmWave transceiver solutions with high data rates provides a solid foundation for further development to meet the demands of new LEO satellite systems. 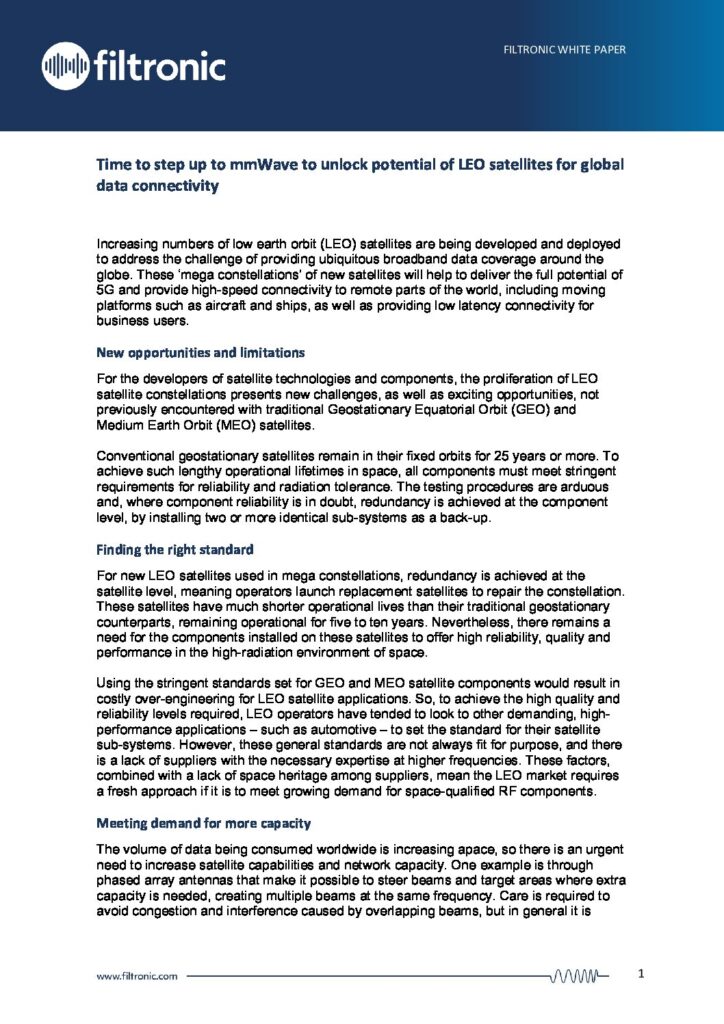